Chip and the Great Greasy Squid by Martin Maudsley 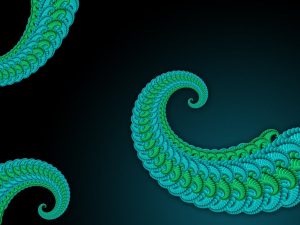 Chip and the Great Greasy Squid

Once upon a time besides the sea, there was – and maybe there still is – a little town called Chippage.

Well with fresh fish and perfect potatoes for ingredients Chippage had a favourite dish… What was it? Fish and chips!

The whole town was booming and there was a chippy on every street corner in Chippage! But, there was a sticky problem; a fat fly in the oily ointment. The people didn’t know what to do with all the waste oil that they had left over from making so many fish and chips. In the end they simply poured the oil down the plug holes and there it oozed out, sticky and slippery, along the pipes and out into the sea.

Oh dear! It didn’t take long for the edge of the sea to become sludgy and slimy, grim and greasy. When the tide came in it brought a yellow, frothy foam of fat. And it was even worse below the tide. There the coastal water was cloudy with globules of oil and gobbets of fat. The poor sea creatures became coated with grease and had to keep their mouths closed to avoid swallowing too much fat.

One little creature wasn’t so lucky. A squid, called Sid, was swimming along one day in the oily waters when all of a sudden he accidentally swallowed a great big lump of fishy-chippy-fat. It was so solid and heavy that as soon as he swallowed it he began to sink. No matter how much he tried to swim he just kept sinking down and down and down to the bottom of the deep blue sea: plop. And there he was stuck on to the sandy sea floor unable to move, weighed down with all that grease.

Poor Sid sitting on the bottom of the sea,

Poor Sid ate a lump of fat, you see.

Covered with oil and stuck with grease,

Poor Sid sitting on the bottom of the sea.

He might have stayed there too had he not been seen by someone else. Someone big and powerful -the King of the Waves; the Tsar of the Sea, Old Neptune himself. With boulders for bones, mud for muscles, seaweed for hair and beard, shiny silver herrings for eyes. He had a golden crown upin his head and a three-pronged trident in his hand…

“What happened to you, my little friend?” Said Neptune. Sid told his sad and sloppy story.

“Well, well. I think it’s time to turn the tide – to help you out and teach that town a lesson.”

Neptune bent down and touched the tip of his trident onto the head of the squid, muttering a magic spell that made little speech bubbles rise up through the sea. Then something strange began to happen…

He grew to the size of an octopus.

Then the size of a turtle.

Then the size of a shark.

Then the size of a whale.

Then the size of a giant squid.

Then the size of a colossal squid…

Now he was a mega-monster with a head as big as a house and each tentacle as long as a street. Sid felt good to be so big. But then remembering what happened to him, he felt angry. So angry that he puffed up and began to rise through the water back to the surface of the sea.

He swam to the shore, and from the shallow water he reached out towards the town of Chippage. One tentacle slimed a house, covering it in thick chip oil. Another tentacle slimed the streets. Another tickled the Town Hall and coated it with grease, and another coiled around the church. Soon the whole town was under attack from the terrible tentacles of Sid – the great greasy squid. The people they shut up their shops, they closed their doors, and waited for the monster to go away. But it didn’t go away, it stayed there in the sea waiting for someone to come out and face him: man to monster. But no-one dared to do anything. All the men in town were shivering in fear. All the women in town were shaking in fright. All the children in town were hiding under their covers. There was only one child who was brave enough to do something – a boy called Chip.

Chip wasn’t very big, and he wasn’t very old, but he had a fist full of courage and a heart of gold. Chip was ready to do something but he didn’t know what to do. But he knew someone else who might know: the Old Woman Who Sits by the Sea.

So Chip opened the door of his house and quietly off he ran, slipping and sliding along the greasy streets of Chippage, careful to avoid being seen by Sid. He ran all along the coast until he came to a little cove rocks, and there sheltered from the sea was an upturned boat, with a door and window. Outside the boat-house, mending her fishing nets, was the Old Woman Who Sits by the Sea. The local folk said she was as old as the sand and as wise as the sea itself.

When she saw Chip she told him to perch on a rock and tell her the whole story. When he’d finished speaking she sucked the single tooth in her mouth as she thought for a minute. Then she looked at him with green eyes sparkling like the sea.

“Three things you must do, to right the wrong and save your town. But I warn you: none of them will be easy!”

“First you must kiss the giant squid.”

“It’s a living being just like me and you,” said the old woman.

“Secondly, you must clean the creature. Wash away all the oil and grease from its skin.”

“Not as big as you think. But you’ll need this.” She gave him a little silver bucket filled with sparkling clear seawater from her sheltered cove.

“Thirdly, you must tell the whole town to stop pouring their fish-and-chip oil down the plug-hole!”

Chip thanked the Old Woman Who Sits by the Sea and slowly walked back along the coast to Chippage. As soon as he arrived back in the town one of Sid’s great twitching tentacles came snaking out of the sea towards him, dripping with smelly slime. He wanted to run away. But he didn’t. He took hold of the tip of the tentacle gently in his hands and slowly brought it down towards his lips, he closed his eyes and kissed… Urgh!

As soon he did, however, the tentacle began to shrink away from him. He opened his eyes as he watched all the tentacles begin shrivel and shorten back towards the body of the great squid. Chip waded into the water and watched as the huge monster shrank back down to a normal-sized little sea squid. Quickly Chip scooped up the sea creature and put it in the silver bucket of clear water, and then gently with his hands wiped away all the oil and grease until its soft white body was clear and fat-free. Then swimming out way from the oil-infested shallow water Chip let the squid swim free…

When Chip got back to the coast, the whole town had come out of their houses and were standing together on the beach. They clapped their hands and cheered at Chip for saving the town.

“It’s not over yet”, he said. “We need to stop the oil getting into the sea…”

Everyone agreed and the next day they had a meeting at the town hall to decide what to do.

“We can’t stop making fish and chips, it’s our livelihood.” Said one.

But then someone else had a bright idea, a brilliantly brainy plan: “If we filter and refine the oil maybe we can use it as fuel?”

They tried and it worked! Soon the whole town was lit by oil lamps from the chippies and the cookers where they fried the fish and chips were fueled by old oil. The beach and coastal waters soon cleared up, and from that day not one more drop of oil went down the sink or into the sea from the town of Chippage. In fact the good news spread to all the other towns along the coast of England from; Fishguard to Battersea!

But Chippage still has the best fish and chips in the country, and I hope you get to try them one day. And as for the Sid, the little squid, as far as I know, lived happily ever after!